Again, I’m sorry its been so long between posts. I’m okay, or at least doing as well as I can be. I’ve been trying my best to keep up with reading, and trying to comment, on everyone’s posts as best I can. But in the past year, I’ve found myself overwhelmed by even the smallest things. It’s been hard to find words for the past couple of years, and I find it happening more often these days.

First of all, I just want to say that I hope everyone is staying safe. I know that many of you are from areas in the world where the pandemic is running rampant.

We’ve had quite strict social distancing and lockdowns here for a while now (Victoria, Australia – although I’m in Geelong, so it’s a bit more relaxed than metropolitan Melbourne, which is about an hours drive away). And as hard as it’s been on a lot of the local community, I know that we have it better than a lot of other places around the globe.

For the most part, it hasn’t really effected me. When my team ask how I’m coping with lockdown, I just jokingly say that I’ve been social distancing my entire life. But really, it hasn’t effected my day-to-day much at all (hooray for agoraphobia and anxiety).

So. Food has been shit in recent months. I was able to stop the alcohol gains around the start of the year, but for the most part, I’ve just been maintaining, which is frustrating. I had nearly a year around a borderline healthy weight. But about three months ago, I ran into a big C-PTSD trigger, and my weight and calorie intake have been dropping ever since.

I feel so anxious and afraid, sometimes I just can’t push myself to eat. I’m still drinking as much – actually, even more – but my food calories have dropped even further. For a long time, my calories from food (excluding alcohol) averaged out around 600 a day. Sometimes 800 one day, and 400 another. It varied. But since the Big Trigger, I’ve been averaging closer to 400 (425 for September), with about 2/3-3/4 of my total calories coming from alcohol.

There were a few really hard weeks. I spent a couple of nights a week crashing mum’s couch, because I didn’t feel like I could stay safe at home. The first really bad night, the first night I crashed there, it was the middle of the night when I went over. She was obviously asleep, and I couldn’t reach her over the phone. But I felt like I was going to hurt myself. So, around 2am, I made sure the cats had what they needed for overnight, grabbed my handbag, and just got in a taxi. I sat on her porch, and rang the doorbell, still in tears. Thankfully she woke up, and let me in. On my way over, all I could think was;

“If I have the sleep on the porch, I’m still safer than I’d be at home.”

It was not my finest moment.

After the initial Big Trigger a few months ago, I self-harmed for the first time in many months. It was nothing that needed emergency treatment, and I won’t go into detail because I know it can be triggering, but it took nearly two months to heal. I even had a couple of overdoses on my medication (relatively minor) for the first time in about a year. It didn’t do any damage or require a trip to hospital, but did knock me out for a couple of days. I’m doing better now, as far as self-harm and overdoses are considered.

I still feel really bad for putting so much stress on mum for those few weeks – constantly crashing on her couch, having breakdowns and crying and blubbering to her. It was starting to effect her. Our relationship has improved a lot since moving out, but this episode put a lot of stress on her, and that’s not something I ever wanted to do again. Things have been bad again trigger-wise in the past week or two, but I haven’t told her. There’s been such a strain in our relationship over the past 10-15 years because of my mental health issues, and it took a big toll on her. So, if possible, I try my best to hide it.

I’d been doing so well with my drinking, having about 10 days (give or take a couple) without drinking each month. But for October, it’s only 1 dry day. September, it was 3. Pathetic.

I know how quickly the alcohol calories add up, even when drinking wine, which has no fat and little sugar – not many more calories than vodka. But I just need the escape, and weed just isn’t an option for me (for those who don’t know, I was a 24/7 stoner for just under a decade, with a couple of those years on synthetics. I couldn’t control it. Now, I haven’t had a single puff on non-tobacco products since last April). Just like anything I consume, the alcohol is measured, weighed, and accounted for. I suppose a lot of alcoholics wouldn’t have a solid idea of how much they consume. But I can look back and go “yep, I had 19.2 standard drinks that day”. So at least that’s something.

I need to get my shit together and get back on track. I’d planned to be down to only drinking twice a week by the end of the year, but a spanner has been thrown in the works. For November, I’m going to aim for seven dry days, just to get back into the groove of things.

The past few months, I’ve been drinking 25,000-35,000 calories a month in alcohol alone. That’s like, 3.2-4.5kg (7-10lb) each month. It makes me feel sick, disgusted and ashamed, to think about. The calories and potential weight loss are the only reason I even want to cut back/quit. And I wish it was enough to make me pour the wine down the sink and go cold turkey. It should be enough. But I’ve gone so long relying on addictions to get me through the day, and weed/synthetics transitioned seamlessly into alcohol, I don’t know how to get through without it.

On the upside, it’s not like I eat more when I drink. Just like the ‘weed munchies’, it’s never really had an effect on what or how much I eat. I might eat different foods after I pour my first glass though. For example, even if they’re the same calories, I’ll take air-popped popcorn over an apple, because foods like popcorn seem to encourage me to drink faster, but apples really don’t.

I haven’t been exercising much since everything hit me. A lot of the time, I feel frozen on the couch, paralysed with anxiety. Usually, exercise helps. But at the moment, it just isn’t.

It’s just hard to find the motivation to eat (or do anything) since the Big Trigger. Most days, I haven’t been eating until after I start drinking, and even then, it’s only because I feel too nauseous to drink without something in my stomach, but I just need the alcohol to numb the pain.

I’m torn. Don’t get me wrong – I love seeing the number on the scale dropping. But I hate that I have no control over it, and that it’s come from something so negative.

I seem to actually have a tonne of things I was to say, that have built up over the past few months. I’m going to keep it short(ish) for today, just to give a general update, but I’m going to try to do at least one post each month.

I’ve only just started typing up my scribbles and journal notes and figuring out what I want or need to say. And there’s still so much to say, so fingers crossed it’s a sign that I’ll be more regular with posting in the next few months. If I disappear, feel free to give me a kick up the butt in comments or email (shout out to Shelby who emailed to check in on me last week). I’ve always leant on this community so much for support, and it means a lot to know there’s still some people out there (even if it’s a bit quieter in recent years). I’m going to really try to update more often, like I used to.

I know I’ve also already got a few of you on Facebook, but if not, feel free to add me (just search for the email in my blog’s sidebar – too-much-not-enough@hotmail.com).

Sorry for the cat spam you’re about to see. But these girls have been my rock, and a lot of days, they’re the only thing that keep me going. It’s only about 1% of the photos I’ve taken since adopting little Sephi (Persephone) back in April, but they show her blossoming personality, and how she gets along with Misty.

I always said he was my reason to live. That Misty would be fine without me, but Billy needed me. He was so co-dependent, with bad separation anxiety. But in that first year without him, Misty became closer to me, and I came to realise that she now needed me too. I think she knew I needed that. And now, little 9-month old Sephi has become even clingier.

Little Sephi is an absolutely angel. For a couple of weeks, I had my doubts as to if I was ready to adopt another furbaby, or if I’d made the right decision. But now, I can’t imagine life without her. Every morning, as soon as she hears me move, she bounces up and gives me a cuddle before I can even open my eyes. After that, Misty sits on my lap while I have my morning coffee. For the rest of the day, I’ve usually got at least one of them on my lap. They really are keeping me going.

Some days, I still want to harm myself to the point of hospitalisation. When it was just Misty, I knew she’d been okay for a day or two without me (with someone checking in to check on her). But with clingy, needy little Sephi, it’s enough to stop me. And if needed, like I mentioned earlier, crash on mum’s couch, where I don’t have access to excess medication or blades.

This has ended up longer than I was planning, so I’ll wrap it up. If I haven’t posted again by the end of the year, feel free to give me swift kick in the behind. 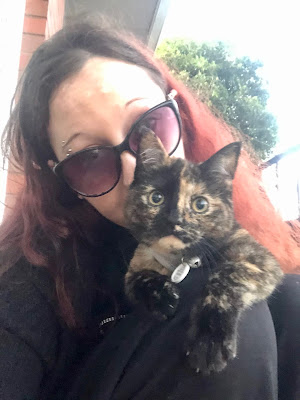 Taking Sephi outside (on her harness). She’s only been outside

a few times, and tends to stay close because she doesn’t like

the noise, but I still want her to have some sense of where

she is in case (god forbid) she gets out one day 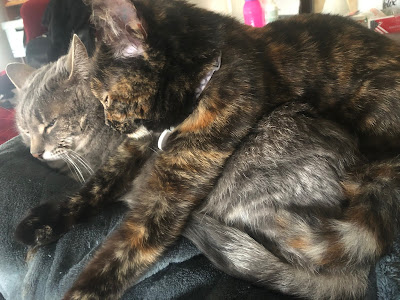 They don’t always get along. Sephi wants to play,

but Misty just wants to snooze.

But when they do get a cuddle in,

it always melts my heart. 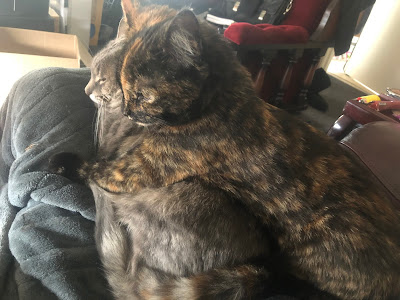 And these are just to show just how clingy Sephi is!

If she’s on my lap/next to me, she needs to have

at least one paw on me at all times. 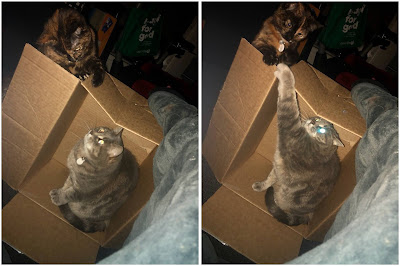 A typical Misty & Sephi interaction – War of the Box! 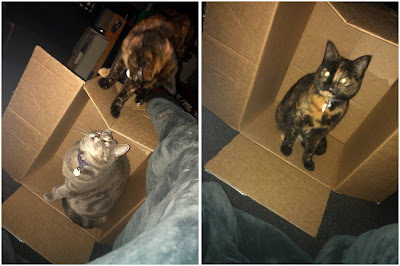 “We are not lost, because we chose to disappear.”