ODE AT THE HOSPITAL

with its hard line. My father’s moustache

has two spots, one light in one dark,

shutting off. My father’s moustache talks

Our Fathers in its sleep—it dreams blue seas.

My father’s moustache goes by Antonio

if you’re family. If not, try a cup of water

under your bed—it cures everything.

I had been writing poems about my father’s illness when I read an essay in which Stanley Plumly describes odes as rendering their subjects into art objects. Something similar to but not quite ekphrasis. My father had a commanding moustache, and I imagined it on display in a museum next to a little plaque. ‘Ode at the Hospital’ began with that image before anaphora morphed it into something more intimate and dynamic.

Jessica Guzman is the author of Adelante (Switchback Books, 2020), selected by Patricia Smith as winner of the 2019 Gatewood Prize. Her poems have appeared in Shenandoah, jubilat, The Academy of American Poets’ Poem-a-Day, and elsewhere. She teaches at Widener University and lives in Philadelphia. 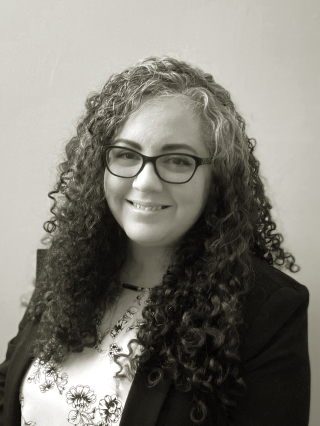 “My Father’s Moustache” is an expression of disdain from 1930’s Brooklyn, a raucous song by Woody Herman & His Herd (https://www.youtube.com/watch?v=Ft8X0wXZOhY) , and a likely name for 60’s/70’s soda shops and used-clothing emporiums. It had, by then, an aura of gentle nostalgia—the “my father” referenced a sprightly older gentleman likely a member of a barbershop quartet. In Jessica Guzman’s “Ode At The Hospital,” these associations ground active description, as the moustache “aced geometry” and “makes cowboys blush.” When the ‘stache shows its spots, “one light in one dark, / like a black-eyed pea, or a tube t.v. / shutting off,” it takes on quasi-religious powers, chanting “Our Fathers in its sleep.” With “My father’s moustache survived chemotherapy” it draws us up short with the reality of illness and invokes the protective exclusivity of family, a magic circle. This is, after all “My father’s mustache,” not yours. Like its subject, Guzman’s poem refuses despair, ending with mock advice tinged with mysterious truth: “try a cup of water / under your bed—it cures everything.” In its terse twelve lines, the poem plays life’s essences against one another—virility and age, cultural and personal memory, humor and sadness, exile and belonging, personality and the loss thereof, the body and the loss thereof.  Set in God’s hostel, Jessica Guzman’s “Ode At The Hospital” makes permanent not just its potent moustache, but the particularity of praise.