A Paeon to You for
Loving A Peon Like Me

The emptiness of
elevated language
may well swell and
lull in such a fashion
that it’s pretty song
when entering most
ears. I can at least
affirm that with regard
to what enters my own
and very head that a
flourish here and there
can flatter even the high-
est plainspoken praise and
give me cause for quite a
rise. But that, I have to say
is not at all the case with you.
What isn’t straight as forward
on the line that could be drawn
as arrow from my mouth to you
goes in one ear (if that) and out
the other.  Even the slightest of
embellishment somehow makes
its way through some sort of
invisible harvester to be shred
or shucked away before, it seems,
such decoration even leaves a well-
intended mouth; a modifier, however
long or fancy-looking on the page is
only just as good as the malleability
of the spare and solitary word that it
was meant to modify. “In point of
fact,” I’ll hear you say, “much more
often than it is not, a word is meant
and with singularity – its sole entire
purpose is – to represent that of
which it means, and stubbornly.
It cannot just decide it wants to
be transformed nor beautified
no matter that it might show up
in company of another word or phrase
that from whomever well-intentioned
deliverer might have sent so as to
whip or mold it into any other shape.”
These so-called signifiers are but to
you completely insignificant, no matter
how elaborate, regardless of how many
syllables or how they might with such
dramatics trip sensationally off the tongue.
It is clear as clear can be that you believe
that to exhalate even one such hopeful
lexicographical aesthetician is time spent
irreversibly and irrevocably wasted. “Most
words, it’s true, are stubbornly stuck and
with being what and only what they are,
and that is where linguistic beauty lies; it’s
all the beauty words will ever need, if you
ask me,” I’ve often heard you say. This
does go on, and often, to this day. And
while you voice so confidently on about
how there’s never any need to doctor
elocution up, declaring what a most
impressive thing it is, indeed, to utter
with simplicity and never emit even a
single word that isn’t wholly necessary,
“Just tell it like it is. And on such matters
how, my dear, could anyone but concur?”
I smile as if to convey my absolute agree-
ment with his logic. But I’m barely there.
Because I’ve never seen a set of eyes upon
a so fine a face, and never held a hand
belonged to anything sweeter. And all
the while in awe of all of that, I wonder
how on earth I might begin to put into
any words at all (not to mention simpler
ones) the host of giddy transformations
that occur each time that line that’s formed
between us gets of any distance shorter. Or
how, more inexplicable still, those pleasant
feelings grow, exponentially, and into such
a word-defying roil, how inundated my entirety
is met with such a palpable euphoria. But this
I keep and to myself in greatest hopes to not
dissuade you of your presence. I’ve no mind
at all but to never speak without any super-
fluity and without an iota of abundance, to
the invaluable end of here with you remaining. 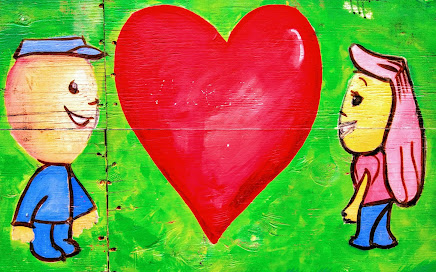