A beautiful and neglected crop, bamboo shoots are a valuable crop in many parts of the world. Moreover, their proper harvesting can also prevent weeds from growing nearby.

Bamboo is in the grass family and grows readily and rapidly in a wide variety of environments. The bamboo shoots have been used traditionally for food preparation, building material, and as a form of medicine since civilization.

Bamboos are perennial flowering plants with a dense and evergreen leaf that is commonly used for furniture, fuel, and in food production in many parts of the US.

Some species of bamboo are consumed as whole grains, and the cooked young shoots are used as vegetables, especially in Chinese cuisine. Moreover, the leaves of some bamboo species are also used as feed for livestock.

A cane is just a regrowth that has a firm texture that develops shortly after germination. The most common bamboo varieties are either clumping or running, but they each grow from underground stems known as rhizomes, which contain the genetic material necessary for growth and sprouting points called growth nodes.

Is Bamboo Shoot Edible and Nutritious?

In addition to being edible, bamboo shoots are also low in fat and calories, easy to grow and harvest, and contain large amounts of fiber and potassium. They have a mild taste, but they blend well with other dishes.

It is possible to eat bamboo shoots in their tender stage right after their emergence from soil, asparagus-like, in the spring season. There are hundreds of edible species of bamboo are found in the world. However, some are tastier and more productive than others. It takes hours to cook stiff, small, sour shoots so that they become edible, which is not adequate for many species.

Moreover, to prepare bamboo shoots to make them more edible and softer, follow the instructions below. All shoots should be cooked before consumption in order to neutralize toxins from some species of bamboo. The most tender, tastiest, and plentiful bamboo species are the ones mainly cultivated for food.

It’s true that shoot size doesn’t necessarily associate with essence, but the lengthier the canes are above ground, the more sized the shoots, and therefore the more the yield. Bamboo species vary in their cold tolerance, therefore while choosing a variety you have to take climatic constraints into consideration.

Most bamboos of the genus Phyllostachys are difficult to grow in the United States and are considered topnotch bamboo for American growers. However, these two bamboo species are well adapted for producing remarkably appetizing canes:

It is a widely used bamboo shoot specie in the Asian food industry. Moreover, this specie can reach up to a height of 40 feet which makes it more valuable and produce canes of about 3 inches in diameter.

The canes of this species may reach a diameter of 8 inches. It is commonly accessible in plant nurseries of America, eventually growing to a height of 50 feet or more. Moreover, its harvest is commonly used for commercial purposes in Asia for food, feed, and general construction. 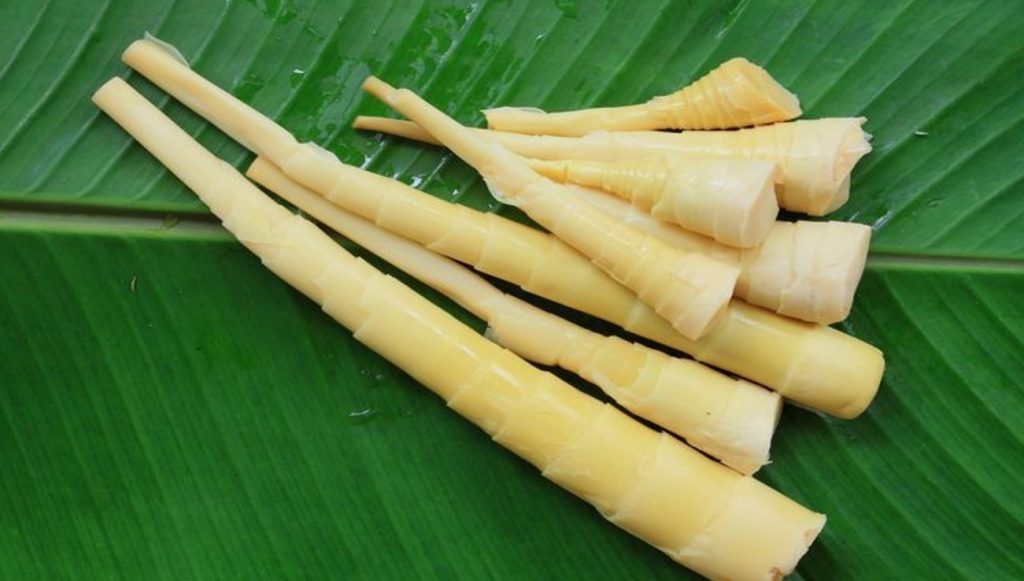 Bamboo is easy to grow evergreen plant. Moreover, it shows a quick growth in rich, well-drained soil. However, a sunny or partial shady environment plays a crucial role in germination and shoot emergence. Since bamboo is essentially grass, it grows lushly when it is supplied with sufficient water supply.

However, water bamboo shoot plants when the top inch of soil becomes dry. Moreover, efficient control over the amount of water is very important if soil drainage is poor. It is considered that waterlogged soils are a certain death strike for bamboo species.

Planting bamboo in fertile soil will not need you to add fertilizer manually. If you do, however, you will indeed yield more shoots since it is enriched with nitrogen.

Despite the high nitrogen content of animal manure, it is not recommended to fertilize bamboo with animal manure. It is because the plants could come into direct interaction with pathogens present in the farmyard manure. Therefore, market available fertilizers are best recommended.

Bamboo’s “clumpers” cultivate rapidly and form compact clumps, whereas runners spread via long underground root systems. This clumping behavior has given bamboo an unacceptable status as they attempt to colonize large areas with large canes.

However, bamboo species having excellent culinary characters are usually related to clumpers and runners’ genera. Although Fargesia and Gigantochloa are exceptional bamboo shoot species. However, gardeners adopt several ways to prevent runner bamboo from spreading to the nearest regions.

Growing it in a container or raised planter is quite easy. However, while growing in the field, it is imperative to install poly-ethylene sheets to minimize the spread of runners. This sheet needs to stretch at least 18 by 4 inches below and above ground.

However, smaller plantings are better off recommended with underground sheets because they’re expensive and labor-intensive. Moreover, the width and length of the grove should be equal to the distance between adjacent trees. That way, each cane will remain within its designated area.

Bamboo can spread to other parts of the area as well when its shoots are harvested, therefore, every shoot must be harvested deeply to prevent a new cane from growing.

Here are some tips for a successful harvest:

Since bamboo shoots contain a lot of proteins and carbohydrates, as well as vitamins and minerals, and fibers, they are considered one of the healthiest foods. However, the majority of bamboo shoot consumption is confined to the countries of Southeast Asia and East Asia.

However, due to their strong pungent smell and bitter acidic taste, bamboo shoots are not regarded as a popular vegetable crop. Yet the addition of shoots as a vegetable to meals will adjust the taste and bring a new flavor experience to your family.

Useful Article: Types of Crops | Classification and Basics of Agriculture