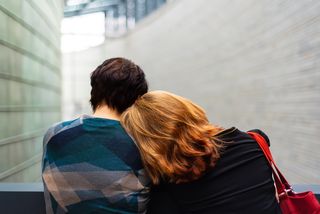 “Humans have a natural motivation to make meaning even in the most adverse of circumstances. They will do whatever it takes to hold on to a sense of coherence, to avoid that unbearable anxiety of loss of sense of self.” —Ed Tronick and Claudia M. Gold

Pediatrician and psychoanalyst D.W. Winnicott would understand why COVID-19 threatens to bring on what has been referred to as a “shadow pandemic” in the form of a mental health crisis. Winnicott used the lovely phrase “going on being” to describe the continuous sense of self that emerges in moment-to-moment interactions in our earliest relationships and continues to evolve in new relationships over time. He described the “unthinkable anxiety” that accompanies a loss of that sense of self.

Now that we are suddenly deprived of the richness of social interaction of everyday life, it makes sense that our identity falters, and with it, our sense of emotional wellbeing. Winnicott named the extreme version of this experience using the old-fashioned term “madness.”

But the fact is that we were already in a mental health crisis, with perhaps an equal but opposite cause. The very stress of our day-to-day lives, with lack of attention to the value and necessity of social connections in which we take time to listen to each other, had already created its own epidemic.

Perhaps one meaning we can make of the pandemic is a renewed focus on the value of moment-to-moment human interaction in preserving our emotional health. Consider the story of Mona, Alice, and Emil.

On a typical pre-pandemic home visit in her work as an early intervention specialist, Mona found herself chasing Emil’s mother Alice around the house as she multitasked, her attention barely focused on her 2-year-old son whose extreme sensory sensitivities disrupted their moment-to-moment lives every day.

Now on Zoom visits necessitated by the pandemic, Alice was called to stay put in the small box on the screen while her son played on the floor by her side. She noticed how her very presence helped him to play in an organized and less frustrated way. She listened as Mona shared her observation of Emil’s reaction to his mother’s calm interaction.

In turn, Alice confided in Mona that she often felt overwhelmed by the task of caring for her two young children as a single mother in recovery from opioid dependency. Her fear and guardedness abated. The relationship between Mona and Alice deepened. Alice felt more competent and less alone. Over several weeks, she observed a significant decrease in Emil’s tantrums.

The sudden dramatic deprivation of social engagement brought on by the pandemic brings into relief the role of relationships and social connection in our emotional wellbeing. However, current models of mental health care treat mental suffering as residing primarily within an individual. The pandemic offers an opportunity to re-examine both the understanding and treatment of emotional suffering.

In a brilliant analysis of the significance of Winnicott’s work, psychotherapist James Barnes places his theories in the context of contemporary mental health care. First, he offers this overview:

“At the most basic level of our being, Winnicott believed that separate minds give way to experiential units—that subjects with minds emerge out of the domain of interpersonal relations: the ‘social matrix of psyche,’ as I like to call it. Thus, far from being separate, closed-off entities that somehow manage to figure out each other externally, we are, according to Winnicott, radically open beings in immediate contact with each other.

“Winnicott expressed this idea enigmatically when he said: ‘There is no such thing as a baby… if you set out to describe a baby, you will find you are describing a baby and someone.’ His perspective is most relevant for understanding a baby’s experience with her parents, but it’s at the core of all experience, even though we don’t usually recognise it as such. Experience of the world and others is the primary given, and minds—rather than traversing an existing separation—are in a certain sense responsible for creating it.”

He then notes that while Freudian theory, modern psychiatry, and cognitive behavioral therapy all see psychopathology as contained within an individual, “By contrast, Winnicott understood psychopathology primarily in terms of trauma or deficit in the relational domain… Crucially, what goes wrong is not to be located in the individual per se, but in the experiential units that the person was and is involved in (including, by extension, the sociocultural milieu in which they find themselves).”

In my new book, The Power of Discord, co-authored with psychologist Ed Tronick who developed the famous still-face experiment, we link Winnicott’s theories that he derived from clinical experience with Tronick’s decades of research with parents and infants. We reveal the concept of meaning-making in relationships as core to our sense of self and our emotional wellbeing:

“The moment-to-moment engagement with people, as babies misunderstand and then reevaluate others’ motivations and intentions, is the process by which they make meaning of themselves in the world…Our sense of ourselves and the quality of our relationships throughout our lives are embedded in our experiences, in our moment-to-moment interactions starting at birth with our earliest love relationships. Our emotional well-being derives from a fluid process that changes  as we immerse ourselves in a network of relationships.”

The still-face paradigm, like Winnicott’s theories, offers a different perspective from the medical model. We write:

“As we have seen, emotional well-being and emotional distress both grow out of variations in the repeated moment-to-moment exchanges that make each of us who we are. Rather than being fixed, the meanings you make in your earliest experience are continually changing in new relationships in an ongoing process of making meaning of yourself and the world as you grow and change.”

With hope, this universal human experience in the face of the pandemic will for once eliminate the stigma of emotional suffering. As we write: “We need not stigmatize emotional suffering to appreciate its complexity. Acknowledging developmental and relational context should not be shaming.” Perhaps the pandemic will serve as a call to shift our whole approach to mental health care.

History will continue to make new meanings of the pandemic in a developmental process over time, analogous to the meaning individuals make over their lifetime of their unique experiences of childhood adversity. We make meaning of ourselves in a whole slew of relationships, beginning with the first love relationship between infant and parent. When meanings go awry, we need to look to human connection, with all its inherent imperfections, to find our way forward.