As nations across the globe mark ‘World Autism Awareness Month’, a UK charity says most people are “unaware” of the reality of life for people with severe autism living with chronic health conditions.

Biomedical charity Thinking Autism says “strong research” shows the severity of autism can be linked to other health problems. 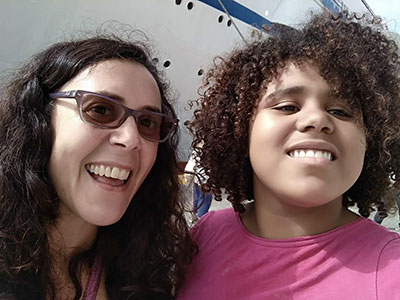 Claire Seiler with daughter Ariella. Seiler says she does not participate in official autism awareness occasions

It points to studies showing that epilepsy, gut problems, depression, anxiety and obsessive-compulsive disorder are all more common in autism.

More than 50 years of ‘awareness’

More than 50 years have passed since the Autism Society in the US held the first National Autism Awareness Month in April 1970.

Despite such efforts to raise awareness of autism over many years, Thinking Autism says the “most vulnerable” are still overlooked.

Joanne Allman is a trustee with Thinking Autism and her 21-year-old son Matty has autism, a learning disability and epilepsy.

Allman, from Formby, Merseyside, said “early mortality and physical suffering” are “being ignored” among those with severe autism.

Diagnosis ‘should be split’

Ariella has struggled with challenging behaviours, including hitting, scratching and kicking out.

She said: “I don’t even participate in Autism Awareness Week because none of the events seem to be tailored towards the severe end.”

The diagnosis should be split, with severe autism treated as a “separate condition”, says Seiler.

Tom Purser is head of campaigns at the National Autistic Society.

He said a better understanding is needed across society of “the different experiences of autistic people and their families”, including “those who have a learning disability or need round-the-clock care”.

He said his charity visits schools and workplaces to share stories about autistic people, including those “with high support needs”.