“Without paranoia, there’s nothing. My knowledge of

homeland trivia is nothing if not 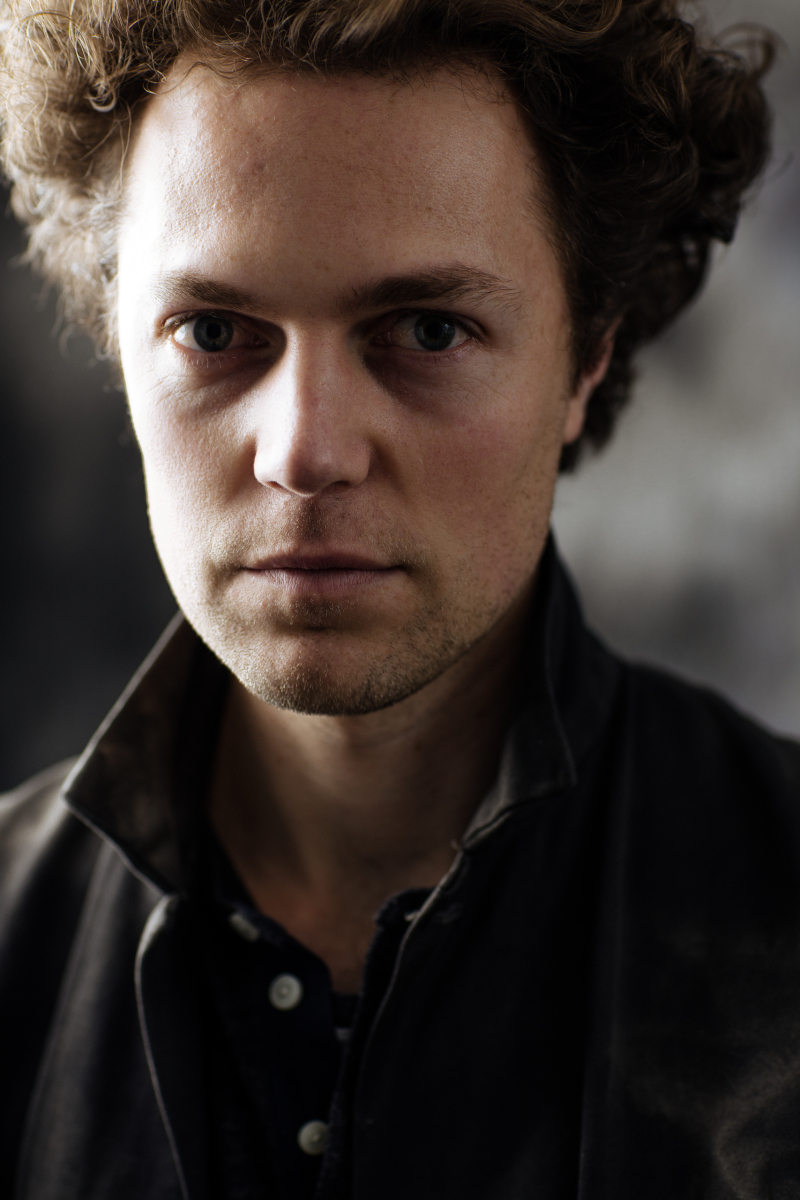 Toby Fitch works in the great tradition of Australian (post-/modernist) poetry that takes play seriously and regards irreverence as a sincere expression of esteem, and stretches from Christopher Brennan’s 1897 pastiche of Mallarmé’s Un Coup de dés to John Tranter’s innovations in “proceduralist” compositions, and unwittingly passes through the oeuvre of the fictional Ern Malley. Over the course of his six collections to date, Fitch has paid tribute to this lineage by borrowing from both its source material and apparatus to construct a poetry that offers something entirely new: an unnerving ability to make the reader an accomplice to the poetic experiment, a kind of involuntary collaboration that is most pronounced when Fitch’s ambition seems to be to dismantle the poem itself. What I find most interesting about Fitch’s poetry is not so much the novelty of his techniques as the peculiarity of their effects, which  frequently remind me that in our alchemic relationship to language, we are the more combustible element.

If a feature of modernism has been to remove the all knowing, all seeing poet from the center of the poem and invite the reader in to participate in the imaginative act, then Fitch plunges us ever deeper, to make us complicit not only in the poem’s achievements, but also its messes, its wrecks, its verging collapse. “i am a permanent & frustrated civilian/bloke of the global village” the speaker of “Village” tells us “thought to be post-everything as all new taste is voided across the furnishings/interior becomes exterior my private abode exploding”. It’s a nuanced way of representing our modern compulsion to “explode” the distinctions between private and public, to externalize our inner life, to blur the line between actor and spectator. In the process, Fitch makes us co-conspirators in his strange, mischievous world. In this aspect, his work might find a precursor in the art of Bruce Naumen.

Fitch’s early experiments in poetic form and aesthetics often pit the volatility of language (the randomness of mistranslation, say) against the exactness of design. These sculptured poems, which at first glance appear entirely confident of their jurisdiction, begin to grow less certain of their structures the moment we enter them. The two arrowhead-shaped stanzas of “Narrows”, from his debut collection Rawshock (2012), seem to hurl down the page in a propulsion of words which is both mimetic of the poem’s shape and seemingly hell-bent on destroying it, like termites that, in the words of Manny Farber, “eat away at their immediate boundaries.” Fitch achieves this through his finely tuned ear for the traditional instruments of poetry (condensing, slant-rhymes; line breaks positioned in the mid-points of action) and how language works outside of poetry, that is: misunderstood, mangled, and patched together. Rawshock, for instance, is a paronomasia of “Rorschach”, and references a poetic sequence in the book which reshapes the Orpheus and Eurydice myth using the ten original Rorschach inkblots as templates.

Or take “Mauvement”, with its liquefaction of language into a kind of precipitation of data, in which certain words come in drops of syllables, so that we are able to locate the vice in our “de vices”; we find the error in the “conq/erors of the world”; and our weather systems arrive regendered (for so long exclusively given female names) as a “male storm”. 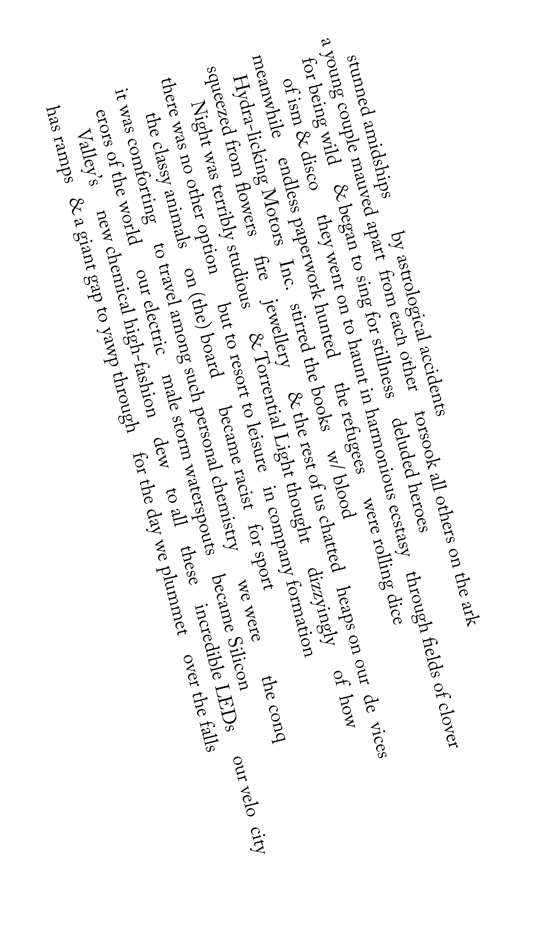 “Mauvement” from The Bloomin’ Notion and Other Stories of Beau

What we get here is Fitch’s fixation with the way language can be broken open by mistake/pun/(mis)translation to reveal a more genuine meaning lurking within, which is to say: there is much truth to be found in the unintentional, the error. The poem also exhibits Fitch’s talent in playing with our physical expectations of reading a poem: tilting one’s head to align ourselves with “Mauvement”, the words, rather than secure themselves in place, begin to cascade away from us, so that we become increasingly unbalanced and begin to experience a form of slippage ourselves.

There is a latent energy in Fitch’s poetry that our attention—never wholly innocent—explodes to life. In many of his poems, the reader can be made to feel like a wolf who has sidled its way into the stockade and stirred up the horses—a few lines in and one half expects the fences to come crashing down and the words to bolt off the page.

In his second collection, The Bloomin’ Notions of Other & Beau, Fitch turns his attention to Rimbaud’s Illuminations, flipping each poem upside-down to “write backwards through them, hijacking and re-versing their content”. Fitch tell us he relies upon “the French of Rimbaud, the translations by John Ashbery, the filter and slippage of every language on Google Translate, a sense of reckless abandon, and an ear/eye/err for the pun” to construct an extraordinary book that reverses the cultural loop of the colonial circuit, and opens up the possibilities of what it might mean to be “Australian” (he interchanges the moniker “Aussie” with the French aussi: also, as well, too), while puncturing some long held national delusions.

But before I go any further into the political concerns of The Bloomin’ Notions, I want to share some lines that give an overall sense of the delight the collection takes in language, and the revelations that arrive in the form of fluke, error, blooper:

“To the lovemobile! Because I’m the original/inventor of desertion” (from “Vices”)

“there will be no headlines/tomorrow what a relief! but i will have to pay/some serious rent to re-carpet this womb!” (from “In Fancy”)

Within these slippages and puns lies a more profound interrogation of one of Australian poetry’s preoccupations: how to shape a poetics from our genocidal colonial past, when, as Jonathon Dunk observes “any simple assumption of formal cadence implies and reifies colonial possession.” Australia is at once both a replica of Europe and its opposite, it’s antipode—an extension of the European imagination, first as mythic paradise, then as island jail, all the while being in reality home to the oldest continuous culture on Earth. It has given us a national character that is built upon both malformed ideals of “Australianness” and a long-held inferiority as Europe’s subaltern. 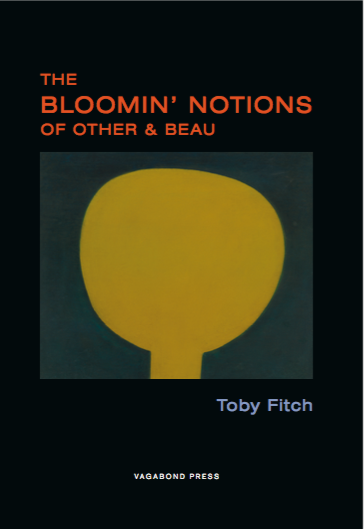 One way to approach the problem is to intentionally mishandle, mistranslate and botch our European cultural inheritance, to master the canon forced upon us and then rearrange it. In Fitch’s essay Aussi/Or, which explores Australian poetry’s tradition of such mistranslations, he writes of the political principle of a poetry “generated by paronomasia—by the difference and sameness in words; a poetry of multiplicity that questions truth, mastery, authority, and symbolic structures by trespassing upon and through them, undermining them; poetry that “offers you up” a serious parody, serio ludere, a paradox in terms; a poetry of unreason, that transgresses boundaries.” The Bloomin’ Notions certainly fits this bill.

Speaking on his poem “In Fancy” (a mistranslation of Rimbaud’s “Enfance”, and also a clever play on “infancy”), with its magnificent first line “why on earth would I blow open the safe/of childhood?” Fitch  describes his “inversions” as “partly procedural, partly just play, part larrikin, part love, it’s a ‘down under’ conceit, this method of writing backwards.” One would struggle to think of a better set of ingredients with which to advance an Australian poetics.

N.B. I have used screenshots of “Mauvement” to best illustrate the physical nature of Fitch’s poetry, and whose design and typography are far beyond my ability to reproduce. You can click the image to get a larger, clearer, and isolated view of the poem. ~ T.M.